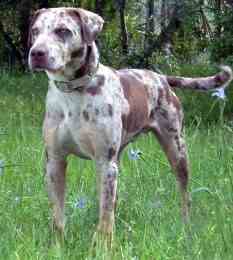 The Catahoula Leopard Dog is the ultimate working dog and is said by many to be the world\'s most versatile breed. Catahoulas excel at herding and hunting almost any type of cattle or game (including wild boar, raccoon, squirrel, bear, and deer). Catahoula Leopard Dogs can also be used for SAR and narcotics detection. Although better at hunting and herding wild game, they can also be used for treeing. They are naturally protective of their home and family, and make excellent watch/guard dogs. Catahoulas are exceptionally intelligent and loyal. However, they are also a highly energetic and very assertive breed and require an experienced owner. A working or hunting home is preferable, as these dogs are best at picking fights with their quarry. They are affectionate and sensitive to their owner, yet tough on game. As one owner puts it, they are "strong" and "made of whipcord and leather". They are very protective of their family, and are not generally kind to strangers. They are tough in the working fields and work best herding or hunting wild animals, rather than docile ones, since they might be too harsh on them. Catahoula Curs are generally more tough and aggressive than other shepherd dogs, so an experienced owner is highly suggested. Bred through natural selection of the fittest dog, this breed has evolved to be the best at what it does.

Catahoula Leopard Dogs are assertive, strong, workaholic dogs. They are affectionate and playful with their owners, but remain wary of strangers. They are very protective and not afraid of a fight, in fact they like to pick fights with quarry. They generally get along with children, but should be supervised. They are more tough than most other shepherd dogs, as they heel harder and are more aggressive with livestock. Best used for wild animals, this breed may have red wolf blood. They are dominant, strong-willed and serve as pack leaders.

This breed is mostly healthy and generally free of diseases. Dogs with primarily white coats have an 80% chance of deafness in one or both ears, and/or blindness. Other dogs have had problems with tunnel vision and abnormal pupils, as well as hip dysplasia.

Catahoulas require a lot of exercise the minimum should be a run for a full hour daily. A good exercise would be herding, treeing, or some other activity that requires them to run.

The Catahoula Leopard is highly assertive, strong-willed, and dominant. They require a strong, dominant, and active owner. Early obedience is essential. Training must be done with firmness, fairness, and consistency.