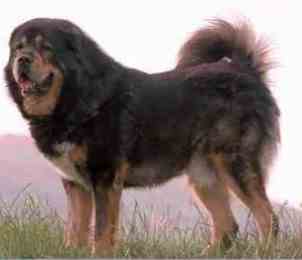 The Tibetan Mastiff is a powerful, muscular dog with a sturdy bone structure. It is very large with a broad, massive head and a heavy, dense, medium-length coat. It makes an excellent livestock guardian; it is willing to fight fiercely against predators and intruders and is also an outstanding guard dog for the home. In Tibet this dog was often tied up from two months of age to enhance aggressive tendencies. One dog was sometimes used to guard an entire village. It is very protective, territorial and very loyal to its own family.

The Tibetan Mastiff is dignified, even-tempered, calm and thoughtful. It is patient and loving with children but distrusts and is reserved with strangers. This breed makes an excellent watchdog and guard dog. It comes naturally to this dog to guard its family and their property. This breed is an outstanding sheepdog and is ferocious against wolves or leopards that try to approach its flock. This dog is highly intelligent it was bred to take initiative. It is brave and fearless when properly socialized. It is somewhat strong-willed and very determined, but with a desire to please. It is easy to housebreak. It must be thoroughly socialized and trained to become a fine family guard and companion. Socialization at an early age is a must. It needs firm, consistent, but patient and gentle obedience training. Harsh, strong words and readiness to hit the dog will only cause it to ignore its handler even more. The objective in training this breed is to achieve a bond of mutual respect, which can only be accomplished by showing respect. If you wish to add a second dog to the household, a mellow individual of the opposite sex, spayed or neutered, preferably of a non-dominant breed, is recommended. The few individuals that remain in Tibet are ferocious and aggressive, unpredictable in their behavior, and very difficult to train, but the dogs bred by the English are obedient and attached to their masters. Bitches usually only have one heat per year, between October and December; in most other breeds, two heats are the rule. This breed comes to adulthood somewhat later than other breeds. This dog requires daily walks, but should not be over-exercised. Due to the breed\'s size jogging is too hard on the joints. The Tibetan Mastiff has an average demand for exercise and will enjoy going with you for a walk in the woods, but it is not particularly enthusiastic about playing with a ball or anything like that. Be careful that the bones, muscles, and joints of the dog are not overworked during the growing stage by not overdoing the physical side of its life.

Thick, dense, medium-length coat, it forms a heavy ruff around the neck. The coat should be brushed regularly. In the winter the coat has an abundance of very thick hair. It sheds only once a year during a four-week period in spring and/or summer. During this time it should be brushed and combed for at least a half hour each day. This breed is good for allergy sufferers.

They have a low susceptibility to illness, but cases of ectropion, entropion, hip and elbow dysplasia, and hypothyroidism have been reported.

Tibetan Mastiffs should always have regular exercise, but it should be regulated as too much can cause problems with the joints due to his size. Regular walks should be sufficient, but he should have at least a medium sized yard.

Socialization and discipline should begin at a very early age. This breed can be stubborn and independent, and thus somewhat difficult to train. They can also interpret benign interactions as threatening, and should be trained in order to avoid these situations. Learning Rate: High.