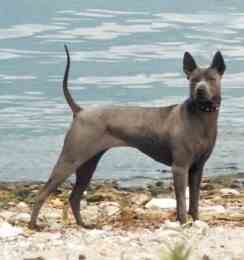 Intelligent and protective dogs, the Thai Ridgebacks have primitive instincts. They can be wary with strangers, and are not averse to a scrap with their fellows as well as people they do not know. They are tough as well, being somewhat undomesticated for many years. They have been known to kill cobras. They are independent. They are excellent jumpers and exercise this trait. They are excellent guard dogs and excellent watch dogs. They do well at hunting as well as simply being a companion. They can be difficult to train, are very active and lively.

Daily exercise with little grooming such as brushing occasionally will keep the coat looking smooth and remove dead hairs.

Prone to allergies, ear infections and obesity. Some common diseases and disorders are hip dysplasia, hypothyroidism, osteochondrosis, dermoid sinus, and gastric torsion (bloat). Bloat is a deadly health issue to most dogs, being the second largest killer of dogs other than cancer. It is also known as twisted stomach, and dogs with deep chests are more susceptible to it.

The Thai Ridgeback thrives on exercise and stimulation. It is extremely important that this breed does not become bored, as they will be highly destructive. They will do okay in an apartment dwelling provided they receive sufficient exercise. However, the Thai Ridgeback does best with a large yard where there is ample room to romp and run. It is crucial that yards be safe, secure, and have a very high fence. They benefit from going on securely leashed walks, and enjoy all family activities.

Gentle and consistent approach with a dominant owner is needed. This dog can turn aggressive and unmanageable if not raised correctly. Learning Rate: Medium. They are moderate learners. Obedience - Medium. Trainer should be firm; obedience training is strongly recommended while they are pups. Thai Ridgebacks can be somewhat difficult to train and require a strong leader.