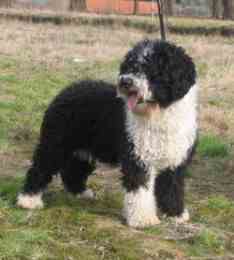 Lively, fun loving and full of energy, the Spanish Water Dog is a clown in a curly coat. They love the water, and were once used as fishermen\'s aids in bringing in nets and catching items overboard. The Spanish Water Dog can even dive! Rather obedient and willing to learn, they actually enjoy working and are eager to do so. They are affectionate and loyal, cheerful and fun. However, they are not so friendly as to ignore a threat. The Spanish Water Dog is wary of strangers and makes an excellent watch dog. They also get along with children, although merely tolerating them. The Spanish Water dog is a dog of many names, being called the Perro de Agua Espanol, Turco de Andaluz and several other names. They are medium sized dogs that have extensively curly hair that is never in need of brushing. The coat, if grown out, will cord and is encouraged to do so. They come in colors of white, black, chestnut, white and black or white and chestnut. The color of the eyes and nose compliment the breed\'s natural fur color. They are strong, woolly, and an energetic choice.

The Spanish Water Dog loves to have fun, loves the water, and is a very active breed. They are faithful and obedient, and they rather enjoy working. They can be trained to do several things, not just one, using their extremely athletic and hard-working mentality to keep them going. They are a cheerful breed. Wary with strangers, this breed will tolerate children but should not be expected to enjoy them. Affectionate, loyal and diligent, the Spanish Water Dog is very intelligent and not difficult to train. They thrive on working and playing, being idle is something they are not used to. They have natural herding and guarding instincts that serve them well. They are lively and clownish, being mostly one-family dogs.

The coat is never brushed out, rather, it is allowed to be grown out and be corded. They should be shaved once a year.

The Spanish Water Dog is very trainable and obedient. They actually enjoy doing work, being such lively and active dogs.

Training of positive reinforcement from puppyhood should be used on this breed. Learning Rate: High. SWDs like to learn.