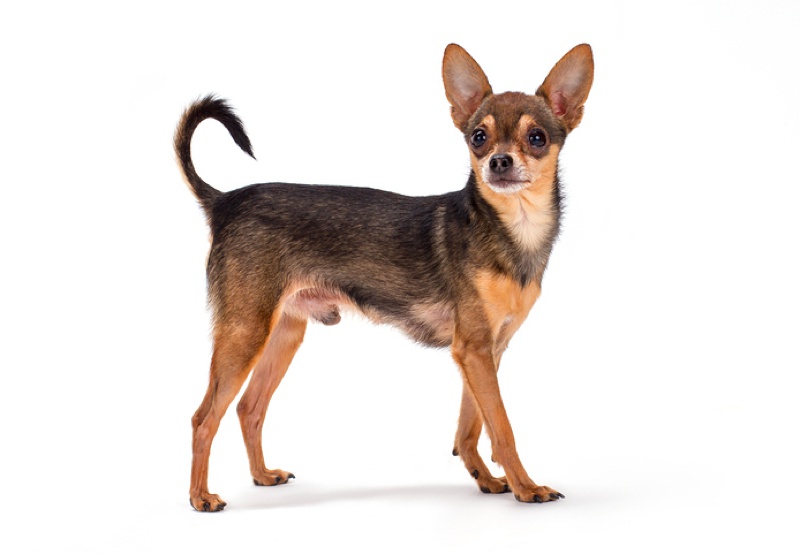 The Russian Toy Terrier is a bold, cheerful and extremely loyal little dog. It has a big character in a small body and can be territorial and protective of its owner. The breed is also very affectionate but it is important that despite their size and the temptation to pick them up that they are allowed to be dogs. Treating them otherwise can lead to the development of behavioural problems.

The breed is very sociable and can become extremely attached to their family, meaning they can be prone to suffering from separation anxiety. Despite this sociable trait they can be suspicious of strangers and very vocal, so although their small size means they do not impose as a guard dog, they will certainly warn of danger. There can be a significant difference in character between male and female dogs.

The smooth, shorthaired coat should be gently brushed occasionally or simply wiped over with a damp cloth. The long coat should be brushed daily with a soft bristle brush. Bathe both types about once per month, taking care not to get water in the ears. Check the ears regularly and keep the nails trimmed. This breed is an average shedder.

What You Need to Know About Russian Toy Health

The Russian Toy is a generally healthy dog. His average life expectancy is 10 to 12 years, and he may live up to 15 years or more.

All dogs have the potential to develop genetic health problems, just as all people have the potential to inherit a particular disease. Run, don’t walk, from any breeder who does not offer a health guarantee on her puppies, who tells you that the breed is 100 percent healthy and has no known problems, or who tells you that her puppies are isolated from the main part of the household for health reasons. A reputable breeder will be honest and open about health problems in the breed and the incidence with which they occur in her lines.

Health certifications your pup’s parents should have include:

If a breeder tells you she doesn’t need to do those tests, because she’s never had problems in her lines, her dogs have been vet checked or gives any other excuses for skimping on the genetic testing of dogs, walk away immediately.  Careful breeders screen their dogs for genetic disease and breed only the healthiest and best-looking specimens. But sometimes Mother Nature has other ideas, and a puppy develops one of these diseases despite good breeding practices. Advances in veterinary medicine mean that in many cases, the dogs can still live good lives. If you’re getting a puppy, ask the breeder about the ages of the dogs in her lines and their eventual causes of death.

Remember that after you’ve taken a new puppy into your home, you have the power to protect him from one of the more common canine health problems: obesity. Keeping a Russian Toy at an appropriate weight is one of the easier ways to help extend his life.

The Russian Toy Terrier is a small breed and therefore does not require much exercise. Around 30 to 45 minutes of walking a day should be enough to keep it happy and healthy. It is, however, more active than some other similar sized breeds, so potential owners should not be under the impression that no walking is required. The breed’s size means that it is ideally suited to city living and can cope well living in an apartment.

The Russian Toy Terrier is extremely intelligent and very quick to learn commands, therefore training recall and house training are not usually a problem at all. This ability to learn means that care must be taken to ensure that the breed does not pick up bad behaviours.

Consistency is therefore important when training the breed and not being tempted to constantly pick dogs up is important. Despite their small size, the Russian Toy Terrier is very active and energetic and enjoys having plenty of mental and physical stimulation.