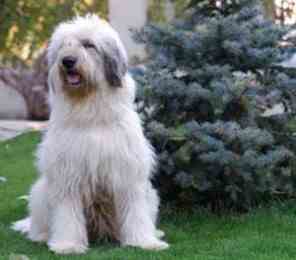 The Mioritic is a breed of large sheep dogs that originated in the Carpathian Mountains of Romania. This massive dog is covered in thick fluffy hair. They look like huge teddy bears. They have a compact and robust structure, strong skeleton, inspiring force and respect. Despite its massive stature, they are extremely agile, surprising their opponents through their precise and extremely agile movements. The ears and tail remain cropped. Their main assignment was and remains to guard and protect the herd or their owner\'s property from predators and thieves. Today, Romanian shepherds dogs are appreciated even by the people who live in villages and towns for guarding or for just as pets, because of their equilibrate behavior and their devotion to their owners.

This breed has one of the best personalities, which recommends this breed as a good choice for many owners. The Mioritic has discipline as one of their main characteristics. It is a calm, vivid, well-balanced, alert, vigilant and well-mannered dog. As this dog was used as a herd protector, he is very attached to family and goes all the way when protecting those he is attached to. Because of this dog\'s ability to bond strongly with his master, Mioritic dog training should only be started once the Mioritic puppy is already accustomed to the owner/trainer. The combined strength and loyalty of the Mioritic recommend the breed as a good choice for guard dogs, pets, and flock dogs. It is loyal to its master, but suspicious, untrusting of strangers. It is very good as a flock-guard but it can also be brave and fight bears and lynxes as evidence has shown in the passed. It loves children very much and is patient with child-like behavior.

The coat is long, abundant and fluffy. It covers the whole body; including the head and the feet. The top coat is slightly wavy, long and rough and measures: 3.15-6.3 inches ( 8-13 cm). The coat should be brushed occasionally.

This breed needs physical exercise. They need to be taken on a daily, long, brisk walk or jog. While out on the walk the dog must be made to heel beside or behind the person holding the lead, as in a dog\'s mind the leader leads the way, and that leader needs to be the human. In addition, they will benefit from a large safe area where they can run free.

When raised as a working livestock guardian it will not be trustworthy with unknown people. It loves children very much. The objective in training this dog is to achieve a pack leader status. It is a natural instinct for a dog to have an order in their pack. When we humans live with dogs, we become their pack. The entire pack cooperates under a single leader.