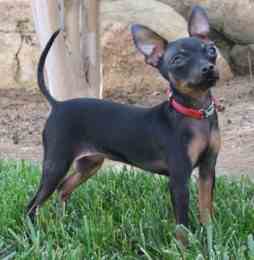 The Prague Ratters is very active, alert and lively. This breed is gentle and intelligent. They are naturally wary of strangers but are always loving to their family. This is a very quick and lively dog.

The smooth, short-haired coat should be gently brushed occasionally or simply wiped over with a damp cloth. Check the ears regularly and keep the nails trimmed. This breed is an average shedder.

Subject to bone injuries due to their small size. Also subject to patellar luxation, an ailment common to small breeds. Krysariks can also have retained baby teeth which may need to be pulled to prevent further problems with dentition.

Although it is tempting to carry these dainty creatures about; these are active little dogs, who need a daily walk. While out on the walk the dog must be made to heel beside or behind the person holding the lead, as instinct tells a dog the leader leads the way, and that leader needs to be the human. Play will take care of a lot of their exercise needs, however, as with all breeds, play will not fulfill their primal instinct to walk. Dogs who do not get to go on daily walks are more likely to display a wide array of behavior problems. They will also enjoy a good romp in a safe open area off lead, such as a large fenced in yard.

They can be difficult to train, but with patience, love, and consistency do well. They respond best to positive reinforcement. Prague Ratters can be housetrained by either the crate method or the paper training method. Early, extensive, and intensive socialization is an absolute must for this breed.