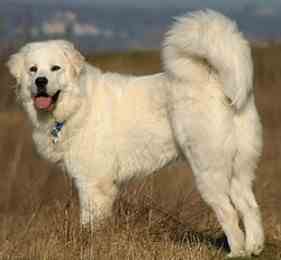 This big, strong, impressive shepherd dog called the Polish Tatra Sheepdog is resistant to climatic conditions. Podhalanskis, another name for this breed, have an all white coat. They do best in northern climates, as they have a thick, long woolly outer coat. Their eyes are deep and brown, and are slightly slanted. They have medium sized drop ears and large feet. Their long tails have been used by humans for sturdiness during a dangerous trek through the mountains. These dogs have special intelligence and instinct, and they are very watchful. Tatras are distrustful of strangers, but faithful and completely devoted to their master and his family. They can be rather independent, exerting their dominance over anyone if nobody else exerts dominance over them. They should be socialized and trained when they are young to know who is master. The Tatra sheepdog is a proud dog and just like any social animal it needs constant contact with its master. They are especially alert at night, often voicing their complaints and warnings to anything nearby. Their imposing attitude and beautifully massive appearance make them a good guard and companion dog.

Polish Tatra Sheepdogs are calm, intelligent and alert. They like to bark at night. They are very discerning and sensitive. They are calm, affectionate with family and very protective of them. They are wary of strangers and can appear threatening to them. They will bite if threatened or pushed to their limit. They have a placid and cheery attitude otherwise. Polish Tatra Sheepdogs are independent at heart, and need training to be told who is boss. They are social dogs and greatly enjoy being with family.

Thick, straight or slightly wavy hair that is hard to the touch with a profuse undercoat. The Poles used to use their fur for spinning wool. Grooming is moderate with occasional brushings. Owners have reported this breed to be relatively easy to keep groomed.

Allergies, cataracts, epilepsy, hip dysplasia and bloat. Bloat is a common health concern to most dogs, being the largest killer of dogs second to cancer. It is also referred to as gastric torsion or twisted stomach.

Polish Tatra Sheepdogs don\'t stand city conditions well. They are working dogs living in a hard, mountain climate. They enjoy a high social life and prefer to be around their master and family rather than off running around, although somewhat independent. The best owner for this breed would be a dog-experienced owner living in a northern climate.

With quiet and gentle treatment Polish Tatra Sheepdogs can be trained as companions, guard dogs and rescue dogs or all the above. They can be a little stubborn and hate compulsion by shouting, scolding or physical force. They can literally be offended and may pretend to be blind and deaf. Proper training requires consistency and determination in enforcing the desired behavior.