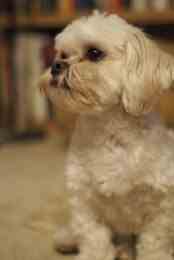 A Peekapoo is a Poodle hybrid that is a cross-breed of a Poodle and a Pekingese and may demonstrate any combination of traits from those two breeds. Poodle hybrids have become very popular in the past few years. They play a big role in the current designer dog trend. The cross with the Poodle is usually because of the the Poodle\'s nonshedding coat. The experimentation of these hybrid or designer dogs has not been recognized by the American Kennel Club or Canadian Kennel Club. The key to cross breeding to purebred dogs is what is called hybrid vigor, the breeding resulting in a healthier dog with superior genetic constitution can come from dogs purebred for so long that they have common genetic disorders. Peekapoo, pronounced Peek-a-Poo is a cross between the Pekingese and the Miniature Poodle. They’re small, friendly, playful dogs. It\'s non-shedding coat makes it ideal for owners with allergies. This designer dog is compact and attractive. The Pekeapoo is dignified, independent and impresses, they may be a little uppity with other dogs after socializing a bit because who knows where they’ve been? They also may be a bit picky about your food choices and expect the best. The Pekeapoo enjoys running and playing with children and getting in their exercise. However, they do not mind being carried around like royalty either. They can be quite particular at times and difficult to train. You have to make it worth their while to follow your commands because they may come across as a joke to this dog. However, all their cuteness will win you over.

Friendly, protective and affectionate with their owners, but uncomfortable around strangers. They can and will bark.

Obedience training is recommended as a puppy.