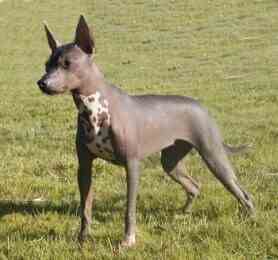 According to the American Kennel Club website, the breed\'s name is pronounced "show-low-eats-queen-tlee", Xoloitzxuintli, or Mexican Hairless for english translation. The Mexican Hairless is a a sensitive breed of above average intelligence and devotion. They are protective, but will meet aggression, rather than instigate it, taking their cues from their master\'s uneasiness of a situation or person. Mexican Hairless are still primitive to some degree and need to be guided by reason and respect, rather than force of will. Though the Mexican Hairless is known as a hairless breed, litters often contain pups that are fully coated. Because the coated pups have traditionally been destroyed at birth, there is no standardization in coat color. This perhaps, has led breeders to believe that the coated pups are mixed breed puppies. A short course in genetics will disprove this belief. The coated Mexican Hairless has a short, course coat that sheds minimally. The coated Mexican Hairless is recognized by the UKC. The breed has a sleek body, almond-shaped eyes, and pointed bat-like ears. They look very similar to the Pharaoh Hound. Xolo come in three different sizes: Standard, Miniature and Toy. The biggest of the varieties are more likely to act as a guard dog than their smaller siblings.

Hairless Mexican Hairless may have hair on head, feet, nape and/or tail. Some will be completely hairless. Coated Mexican Hairless have short, course hair that sheds minimally. They are also hypo-allergenic. Mexican Hairless tolerate sun quite well, though spots lack pigment and need sun block. Though the hairless Xolo (Mexican Hairless) does need greater protection from the elements, they are hardy and can tolerate even extreme cold for brief periods of time.

Mexican Hairless have no know genetic problems at this point. Some do have drug sensitivities, and caution must be used when using any chemical for the first time. Other health concerns include acne, missing teeth, food allergies and skin infections.

Mexican Hairless dogs do not require much exercise. To play and romp will keep them content, but they will also enjoy a walk on the leash.

Early socialization and firm handling, without harsh correction or heavy handedness are imperative. Gentleness is the way to go. Without these, the pups may grow to be fearful of new situations and insecure. This isn\'t a breed for permissive parents, or heavy-handed tyrants.