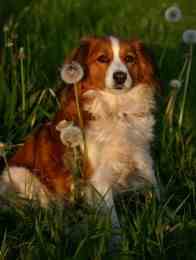 The Kooikerhondje is not a well known breed. They are a small dog, but excellent decoys. Originally used to decoy ducks with their bushy white tail, they are trainable and worthy of a hunt. The Kooikerhondje looks somewhat like a large Papillon, with medium to long length fur coming in the colors of red and white, mostly white with patches of red. They have long drop ears that are quite feathered, as well as the tail, chest and legs. Black sometimes lines the ears, of which fanciers call "earrings". Their bodies, longer than they are tall, are lean and moderately muscled. The Kooikerhondje is a bright dog, intelligent in the ways of luring ducks. They are friendly, cheery dogs who will likely follow their master to the end of the Earth. They are good with older children, and good with other pets. Kooikerhondjes are affectionate and easy to manage, making them ideal for just a companion or as both decoy dog and companion. They active, yet not overly excitable. Although they can be noisy, they will alert their owners of anything unusual that may be going on. Reliable and friendly, the Kooikerhondje is definitely worth keeping in the home.

Kooikerhondjes are active, but not overly excited. They are friendly to most, but are better with older children. They are trainable and intelligent. Kooikerhondjes will alert their owner to anything unusual, making them a good watch dog. They are rather noisy at times. They are devoted and affectionate with their family, and wary with strangers. They are very even tempered and cheerful. They can be very territorial.

Medium to long in length, with feathering on the backs of legs, bushy feathered tail, feathering on the chest and the ears. Fur has a slight wave to it. They have a double coat that is sleek on the outer coat. The Kooikerhondje is relatively easy to care for. It needs a daily brushing to keep its fur in top glossy condition. They should be bathe when necessary, and does not need to be cut or trimmed. They do shed, usually every spring and autumn. Ears should be checked routinely for infection, dirt build up or other substances, as they are long and can sweep up small creatures. Nails should be trimmed routinely as well.

Unfortunately due to a small breeding base from after World War II, this breed suffers from inherited genetic diseases occasionally. These may include cataracts, von Willebrand\'s disease (blood clotting disease), epilepsy, necrotizing myelopathy and luxating patellas.

The Kooikerhondje should receive daily exercise, as they have a tendency toward obesity. A walk every day should suffice.

The Kooikerhondje does better in a rural or suburban environment. An apartment is not suitable for this breed, as they can become lazy and overweight if not regularly exercised. They should be given a fenced yard. The best owner for this breed would be an active owner living in a rural or suburban environment with a job for the Kooikerhondje to do.