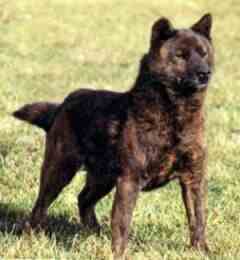 The Kai Dog is considered to be the most ancient, and purest dog breed in Japan. It was developed in the isolated district of Kai (Yamanashi Prefecture) as a hunting dog. Kai\'s were used to hunt boar and deer. This breed was designated a national monument in Japan in 1934.

The Kai Dog is intelligent, agile, alert and brave. They are naturally hunters and make good guard dogs, being reserved with strangers but loyal to their families. They are friendly, often good with children and are not usually aggressive towards other dogs.

They should be brushed weekly to keep their fur mat free and clean. Bathe them as necessary, depending on how dirty they are. Their ears should be checked routinely for wax build up, infection or dirt. Their nails should also be trimmed regularly. Kai Dogs shed once or twice a year, making grooming at these times needed.

Kai Kens need regular exercise on a leash, taking walks or runs. They can also be given a job to do such as herding to satisfy their exercise. Kai Kens should be trained from puppyhood, as they are very willful.

Kai Dogs are the least responsive of the Japanese breeds, and the most wild. They should be socialized from puppyhood, getting them used to new sights and sounds.