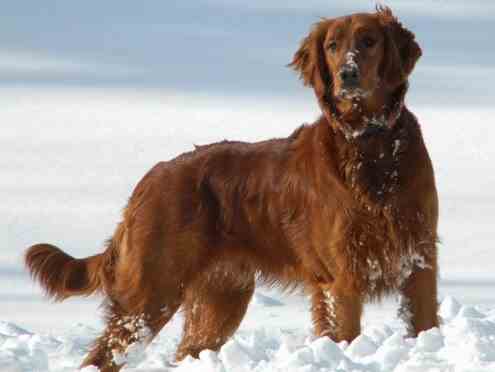 The Golden Irish is a great family dog, they love to be with people, meeting visitors, playing and being at the center of activity in the home. They're great with children and are very loyal to those he gives his affection to. They're smart and easy to train too. They have a lot of energy and like to be active, social and lively. The Golden Irish tends to have quite a big personality but remains for the most part even tempered and trustworthy. He can sometimes lean towards his Irish Setter side and be a bit mischievous so be prepared for some laughs and some groans!

They do not shed as much as the Golden Retriever but does shed some so will need regular brushing, meaning once a day. This will also help prevent tangling especially where his fur gets long. Use a solid hair brush. Bathing with a dog shampoo should be done when they need it. You should also once a week check their ears for infection and clean them. You can use either a solution for cleaning their ears as suggested by your vet, or just a damp cloth or cotton ball. Do not insert anything into the ear. Teeth should be brushed three times a week at least, and nails should be clipped if they get too long.

To avoid health issues with you should buy from a trustworthy breeder who can offer health clearances. It also helps to see the parental health clearances too. As with any dog there is always the possibility that they could be prone to a condition their parents are. In this case, apart from obesity, those would include OCD, Hypothyroidism, CAD, epilepsy, eye problems, HOD, bloat, heart problems, Von Willebrand's Disease, cancer, Hip and elbow dysplasia, Panosteitis and allergies.

They enjoy being active and should get at least one long walk a day if not two along with some play time and some mental stimulation. They're not great for apartment living as they need more room, and a yard is something they need. They would enjoy trips to the dog park, walking, running or jogging with you, playing fetch, Frisbee, and other fun doggy games. If they do not get enough physical and mental stimulation they can become destructive with their behavior. Since they're prone to obesity a combination of watching his food and giving him enough exercise is important to control his weight

All dogs should receive early socialization and training to ensure they are well rounded and the best they can be. The Golden Irish are intelligent and capable of learning. When they lean more towards the Golden Retriever they will be inclined to listen and obey commands and be easy to train and even require less repetitions. But if they lean more towards the Irish Setter you may have a little more difficulty as he may be more independent. You need to use positive training methods, rewards like treats will certainly motivate them since they love their food. Be firm, they need you to clearly establish yourself as pack leader in a consistent and decisive manner without being harsh.