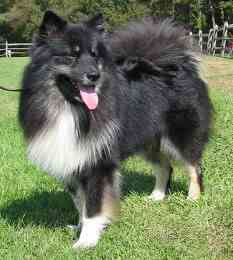 Finnish Lapphunds are friendly, intelligent and vocal. They like to bark at unusual things, making them an ideal watch dog. They have an instinct to herd, although it may be more diminished than it used to be. They are said to "think before they act", taking time to think before they obey. They are quiet obedient, however, and highly trainable. They can sometimes be stubborn, and highly enjoy the cold outdoors. Finnish Lapphunds are courageous, brave and affectionate. They are lively, agile, wary of strangers, and energetic. They love the affection of their owners, and often have a sense of humor in their exuberance. They can be independent, and should be trained from the moment they are brought home.

Regular brushing is required for their bushy coat, but for such a large coat the care is only moderate. For a long haired dog, they are generally low-maintenance.

Although a relatively healthy breed, the Finnish Lapphund may suffer from GPRA (Generalized Progressive Retinal Atrophy), as well as cataracts.

They should receive plenty of exercise, however, as they are an active breed. They will often receive adequate exercise simply from running around the house as a puppy.

Finnish Lapphunds are very trainable. They obey, but may be stubborn at times. They should be socialized from an early age, and firm training should be initiated as they will do what they want if not instructed. Training must remain interesting for this breed or else it will lose interest and disobey.