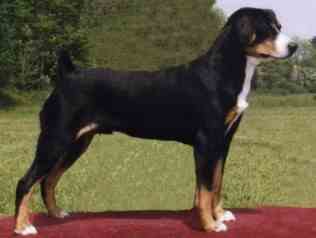 The Entlebucher loves to be surrounded by his people and friends. They delight in the company of people and are friendly with other dogs. Alert and very eager to please. They are used as a livestock guarder and a companion. The breed is quiet and easygoing. Though independent and self-confident, they are very tuned to their owners. These dogs are very aware of boundaries and are territorial and protective, but not aggressive.

The breed wears a short, hard coat with a natural sheen. It is an easy groom dog, regular brushing will due. This breed is an average shedder.

Certain inbreeding that occurred in 1900s has caused a few congenital defects such as hip dysplasia and Hemolytic anemia. Other health concerns include eye problems and orthopedic problems.

Exercise should be regular walks or training. They tend to become chubby if not regularly exercised.

Training should be relatively easy, as this breed loves a job to do. Herding, guarding, or driving, this breed thrives on working for their masters.