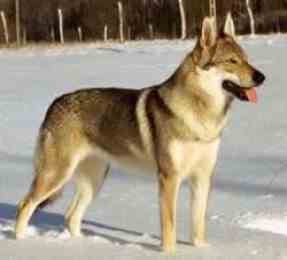 Czechoslovakian Wolfdogs are intelligent and trainable, but get bored with repetition and often need motivation to be trained. They are lively, active and fast. Although some are shy, this is a disqualifying trait in the Czechoslovakian Wolfdog. They are fearless and courageous, and maintain a pleasant sounding howl. They bond strongly with their owner and family, but not well with other people. They are not adverse to other household pets, as they bond with them as well. Encounters with strange animals, although, may result in confrontation. Czechoslovakian Wolfdogs have intense instincts to hunt when they are pups, and this should discouraged early on in order to prevent aggressiveness in adults. Although adolescents may go through a difficult teenage life, females are generally easy to control. Czechoslovakian Wolfdogs are extremely good at trailing a scent.

Grooming is not a big issue with this breed. Brushing every so often will help keep the coat clean.

A sturdy, healthy dog, the Czechoslovakian Wolfdog does better in colder climates but does not suffer from many known illnesses.

Training should begin at a very early age, as puppies will have an intense desire to hunt. This should be discouraged, as adults who still try to hunt become aggressive and harder to handle. Adolescent puppies tend to be a handful, but females tend to be more easily controlled. Motivation is absolutely necessary when training this breed.