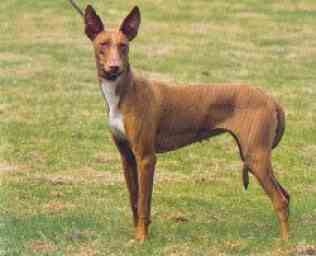 Almost identical to the Pharaoh Hound, the Cirneco dell\'Etna has a similar history as well. The Cirneco dell\'Etna, or Sicilian Hound, is a rare dog not commonly seen out of its native island, Sicily. They are smaller in size, with very short, glossy and harsh to the touch fur. They are thinly wired, with evenly distributed muscles, such as a greyhound. One of the ancient sight hounds, Cirneco dell\'Etnas are excellent at catching their prey. They can sneak up to small animals, even birds, in total silence and snatch them from their hiding place. They were once used to hunt rabbit and other small game. They have excellent noses and almond-shaped, deep set eyes. Their eyes range from yellow to hazel brown color. Their appearance is one of wisdom and understanding, with high pointing erect ears and a thin face. Cirneco dell\'Etnas will adapt to companion if needed, but does not readily adapt to other dogs and children. Cirneco dell\'Etnas will sleep outdoors contentedly, keeping watch for you throughout the night.

A quiet companion, the Cirneco dell\'Etna it lively and friendly towards family. They do not warm up quickly to other children or strange pets, though. They are not easy to train, but are content with sitting outside to watch the yard for intruders. Cirneco dell\'Etnas were said to have "a supernatural instinct to attack the sacrilegious and thief but to welcome enthusiastically the devout" when guarding the temple in Ardano, Sicily. They are agile, swift, and hardy. They are rustic in nature with a strong personality. They can be affectionate, happy, and not usually aggressive. They are usually reserved with strangers, and require firm training from puppyhood.

Occasional brushing with a firm bristle brush is recommended for the Cirneco dell Etna. Bathing should only be done when necessary. Due to the rarity of the breed there are no known health issues.

No known major health issues are associated with this breed.

Cirneco dell Etna\'s require an inordinate amount of physical exercise and mental stimulation. They are not recommended for city or apartment living. The Cirneco dell Etna does best in a rural setting where there is ample acreage to roam, hunt, run, and play.

The Cirneco dell Etna is intelligent, dominant, and requires early and intense socialization and obedience. They will not respond to harsh or heavy-handed methods. Training must be done with firmness, fairness, patience, and consistency.