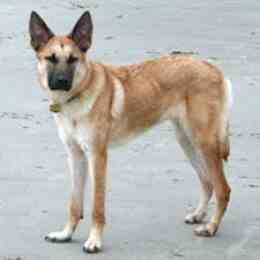 Calm, non-aggressive, and friendly. Sometimes Chinooks are reserved with strangers, but they are very good with children. They are quite headstrong and do require firm training, but not harsh, painful training. They do not respond well to negative training, but do need to know who is in charge. They are among the best sled dogs, possessing great strength and endurance. They are protective of their family, loyal, and very versatile. Chinooks are very intelligent, alert and quite trainable. They get along very well with children and other animals, but they mature slower than other breeds. They were bred to be within a family or unit, and therefore long to be around their owners. They are not good outdoor pets, as they like to be with family.

Chinooks require little grooming. Brushing every once in a while should suffice, as some naturally shed, while others only shed twice a year.

Chinooks require little grooming. Brushing every once in a while should suffice, as some naturally shed, while others only shed twice a year.

Chinooks should have a firm handler when training. They tend to be head strong, making it difficult for the weak-willed to let them know who\'s boss. Although they need a firm hand, a heavy hand is not suggested. Chinooks do not respond well to negative training and have an intolerance for pain. They should be trained from puppyhood.