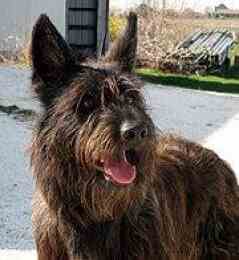 Even though this is a more rare breed, you may recognize the Berger Picard (“Bear-zhay Pee-carr”) as the star dog from the film Because of Winn-Dixie. Also known as Picardy Shepherds, this breed became first well-known in France as a guarder of flocks and the best worker with sheep and cattle. They are closely related to the other French breeds: Briard and Beauceron. As one of the oldest known French breeds, the Berger Picard is often mistakenly taken to be a mutt. This breed is not often found in the United States but is well loved and praised in its native country. These dogs come in a variety of gray and fawn colors and have naturally upright ears. Their scruffy, rustic appearance is why they are commonly thought of as a mixed breed. With a medium-size and history as herders, Berger Picards are strong, hard workers and rowdy players. They require a lot of human companionship and enjoy children. These intelligent dogs tend to be independent and vocal and do best with active, dog-experienced owners who live in a rural home.

Picardy Shepherds are good with children and often have a sense of humor. They also make brave and alert working dogs that stand tough in the face of intruders. Picards are affectionate and friendly, requiring ample human companionship. They are energetic, active and rowdy at play. These dogs are very reliable and intelligent with a tendency to be vocal.

With a unique rustic look, the tousled outer coat of the Berger does not require much special attention. Their fur does not mat but should be maintained around the eyes in order to keep their eyesight clear. The best thing to do with a Picardy’s coat is to brush it regularly.

Since the Berger de Picard is a fairly rare breed, these dogs tend to be rather healthy and not over-bred. Some potential health complications can include elbow or hip dysplasia as well as Progressive Retinal Atrophy (PRA).

Berger Picards need plenty of exercise and are always looking to entertain themselves with fun. These dogs are clever and will easily learn tricks, resulting in their frequent appearance and success in dog shows. This breed has won many accolades for their stunts and agility – the Picardy is faster and more agile than most dogs. When allowed to, they will do their own thing.

The Berger Picard breed has many very desirable qualities as well as a personality of their own. They are lively, active dogs with a charismatic understanding and intelligence matched by their loyalty. They aim to please and should be trained early as they can become aggressive without proper training.