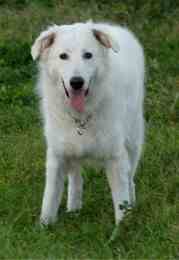 The Akbash Dog is large, lean and muscular with an elegant and racy appearance. These dogs have been bred as guardian dogs whose historical primary duty was to protect sheep from predators. This powerful breed features medium to long white fur that was originally desired in breeding to distinguish them from wolves. Akbash puppies and dogs are typically calm, quiet and brave. This breed is one of the oldest of the flock-guarding group and features a combination of characteristics from the Mastiff and Gazehound breeds. The Akbash breed is the counterpart to the French Great Pyrenese, the Italian Maremma, the Hungarian Kuvasz and other white sheep guarding breeds. They still carry the same mental and physical traits that originally characterized the breed thousands of years ago. Akbash puppies and dogs require respect in both training and upbringing. They are affectionate to their family while being protective and a good guardian against strangers. Akbash puppies should be socialized properly so that they will not be aggressive to all intruders. This breed requires a firm, dog-experienced owner who is seeking a loyal friend and guardian.

Akbash Dogs are extremely loyal and friendly to their owners. While they are calm, quiet and affectionate toward their family, they can be aggressive to strangers and strange animals if not properly trained and socialized as puppies. These dogs are highly intelligent and independent, making excellent guardians and pets. With their peaceful and watchful nature, they are naturally protective and bred to think for themselves. Because of this, they may choose to disobey orders if they believe their choice is better. To find an accurate representation of the breed, choose a reputable Akbash breeder.

Akbash puppies and dogs tend to shed more than the average dog making regular brushing advisable. They have a non-odorous and non-matting coat that is easy to maintain with minimal grooming.

This dog breed can be prone to hip dysplasia, cardiomyopathy, OCD and entropion. Akbash dogs may also have health concerns including hypothyroidism, seizures and umbilical hernias.

Even though Akbash puppies and dogs can have low activity levels, they need regular exercise. Walking or a run off-leash are prime examples of ideal exercise choices for this breed.

As a relatively easy to train breed, bad habits should still be corrected young and as soon as they are brought home from Akbash breeders. Owners should establish a dominant position in the relationship as the alpha being and socialization should begin early. It is advisable that Akbash dog owners also teach their dogs to appropriately respond in various situations.