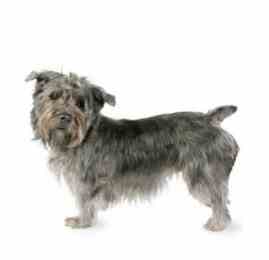 Has great courage when called upon and can be very feisty with badgers, foxes and vermin, but otherwise the Glen of Imaal Terrier is fairly calm and gentle. They are rather docile terriers, more calm than regular terriers. They are affectionate and loyal to their owners, and do well with children. Because of a "no barking" rule in the early days of showing the dogs, some do not bark often. They are usually quiet and very playful. They are hardy, spirited and courageous. Glen of Imaal Terriers are intelligent, highly trainable and easy to get along with. Some are dog aggressive, but they are generally gentle.

Breed is double coated, harsh-textured, weather-resistant outer coat is a of medium length. The undercoat is soft. Regular brushing, strip the coat once or twice a year. Regularly plucking of hair in the ear canals.

Glen of Imaal Terriers have a tendency to overeat. Other health concerns include skin defects, PRA (Progressive Retinal Atrophy) and allergies.

Daily exercise. Glen of Imaal Terriers love to swim, but are not the best swimmers.

Will respond to positive praising. They make excellent candidates for obedience training. They are known to be very intelligent and to learn quickly.