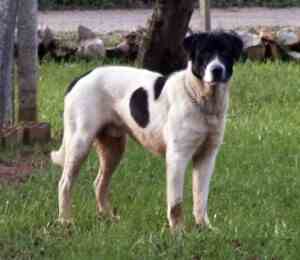 Rafeiro do Alentejos are different from other dogs. They are not for beginners, and should only be kept by a dog-experienced person. They mature slowly and do not respond to the typical training methods. They can be trained, however, to do a job. These dogs are independent, extremely territorial, and good protectors. They will protect their household, their sheep, and their families that they feel are under their protection. They are particularly alert at night, but still vigilant during the day. They are more aggressive than the average breed, which can simply be interpreted as "protective" or "territorial". They can also be hard-headed. Although they are difficult around strangers, they are surprisingly calm around children, and affectionate with family. They can be stubborn and dominant. They are relatively docile around family and children.

Care of the coat requires only a bristle brush and slicker only once in a while. The short hair is not high maintenance, but the coat does shed heavily twice a year. It should simply be brushed out thoroughly. The ears, nails and teeth should be checked and/or trimmed periodically.

Hip dysplasia is rare. This breed is rather healthy.

This breed needs an average amount of exercise. They do not like to exert all their energy on meaningless activities, however, as they would rather save energy for protection or hunting. They should be given a regular walk to keep them in shape.

Training should begin at an early age. The importance of this training is stressed on this breed, as once they become a large dog that can become uncontrollable if not properly socialized and trained. They are stubborn, independent and therefore need to be taught as a puppy how to behave. If this is done, other training should come easier. Learning Rate: Medium. Obedience – Low. Problem Solving – Low.