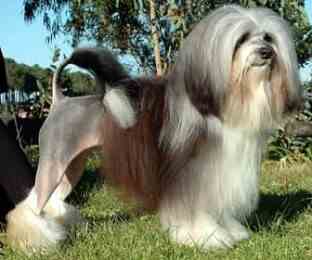 The Lowchen or Little Lion Dog is a member of the Bichon group. They have a long, silky coat trimmed in the traditional "lion clip", with a shaved backside and hair left natural on the tip of the tail, feet, and front of the body. They are not toy dogs, but they are small. Lowchens are attractive in the show ring, and more rarely kept as just pets. They have been around since at least the 1500s, and appeared in royalty paintings and were a favorite among royal European women. A spunky, high spirited dog, they are also happy to just curl up in your lap. Originally used in France as a watch dog and hot water bottle, they are gaining international popularity. While Lowchens are not considered a rare breed, they are still uncommon. Little Lion Dogs are active and affectionate. They can be dominant towards other dogs of the same sex, and are unafraid of a challenge to prove their dominance. They will even take on much larger dogs. Other than that, however, the breed mostly gets along with everyone, including people and animals. Lowchens are eager to please, lively and intelligent - they are a fun dog for the whole family to enjoy.

Lowchens are active, affectionate, and gentle. They are unafraid of a challenge to authority, however, and will fight other dogs of the same sex for their dominance. They are a fun breed, however, and are intelligent and somewhat lively, although not overly exuberant in any way. They outgoing, alert and adaptable. Lowchens are robust and tough, and can be arrogant and strong willed. But, to oppose this trait, the Lowchen will hardly leave an available lap empty.

Wavy, long and silky, but not curly. They have no undercoat. Grooming of the Lowchen should consist of combing or brushing their coat ever other day. Professional clipping every other month should be done to maintain the traditional lion trim. If you are showing your dog in the ring, professional grooming advice and service should be sought.

Lowchens enjoy ample exercise such as a short walk or an active game of play. They do not use a lot of energy, however, and should be exercised daily so that they do not become obese.

Quick learner and intelligent. Should be trained early not to bark or dig.